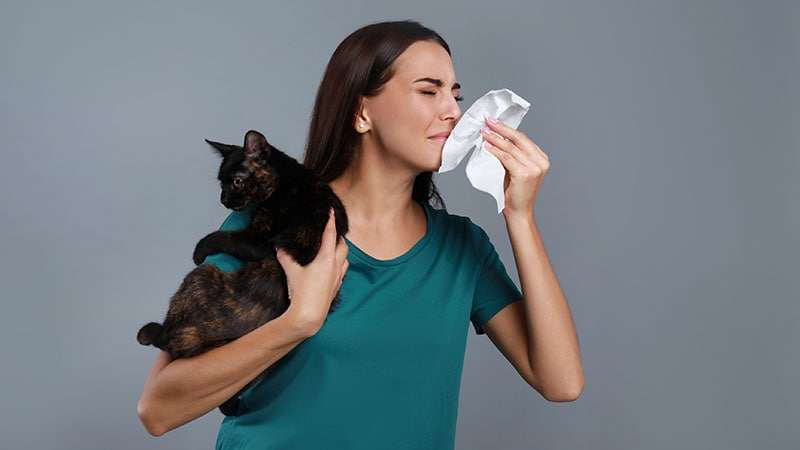 “One year of allergen immunotherapy [AIT] combined with tzepelumab was significantly more effective than SCIT alone in reducing the nasal response to allergen provocation at the end of treatment and one year after discontinuation of treatment,” said study lead author Jonathan Corren. , MD, from the University’s David Geffen School of Medicine. of California, Los Angeles, and his colleagues write in The Journal of Allergy and Clinical Immunology.

“This persistent improvement in clinical response was accompanied by reductions in nasal transcripts for several immunological pathways, including mast cell activation.”

The study was cited in a Press release from the National Institutes of Health (NIH) who said the approach could work similarly with other allergens.

“Cells that line the surface of organs like the skin and intestines or that line the inside of the nose and lungs rapidly secrete TSLP in response to signals of potential danger,” according to the NIH press release. “In allergic diseases, TSLP helps initiate an excessive immune response to otherwise harmless substances like cat dander, causing inflammation of the airways that results in the symptoms of allergic rhinitis.”

The double-blind CATNIP trial was conducted by Corren and colleagues at nine sites in the United States. The trial included patients aged 18 to 65 who had had moderate to severe cat-induced allergic rhinitis for at least 2 years from 2015 to 2019.

The researchers excluded patients with recurrent acute or chronic sinusitis. They excluded patients who had experienced SCIT with a cat allergen in the past 10 years or sensitivity to seasonal or perennial allergens during nasal provocations. They also excluded people with a history of persistent asthma.

In the parallel design study, 121 participants were randomly assigned to four groups: 32 patients were treated with intravenous tezepelumab plus cat SCIT, 31 received the allergy shots alone, 30 received tezepelumab alone and 28 received placebo alone for 52 weeks, followed by 52 weeks of observation.

Participants also received nasal allergy challenges – a spritz of a nasal spray containing cat allergen extract into each nostril at screening, baseline, and weeks 26, 52, 78, and 104. The researchers recorded the participants’ total nasal symptom score (TNSS) and peak nasal inspiratory flow at 5, 15, 30 and 60 minutes after the spray and every hour until 6 hours after the challenge. Blood and nasal cell samples were also taken.

The research team performed skin testing using serial dilutions of cat extract and an intradermal skin test (IDST) using the concentration of allergen that produced an early response of at least 15mm at baseline. . They measured the early phase responses for both tests at 15 minutes and the late phase response to the IDST at 6 hours.

Combination therapy worked best during its administration. Although the allergy shots alone stopped working after they were stopped, the combination continued to benefit participants 1 year after this therapy ended.

“AIT is a very effective treatment that often provides prolonged symptom improvement and is ‘curative’ in many cases,” she said. Medscape Medical News by email. “If further studies show that tezepelumab offers long-term results, more patients may opt for combination therapy.

“An important strength of the study is its assessment of combination therapy responses on cell production and gene expression,” Lugar added. “The mechanism by which AIT modulates the allergic response is widely understood. Tezepelumab may augment this modulation to alter the Th2 response upon allergen exposure.”

“The practicality of the approach may be limited by the need for intravenous administration of tezepelumab in addition to the traditional allergy vaccine,” he noted via email, “and the cost of this therapeutic approach does not is not addressed”.

“Tezepelumab is currently an expensive biologic drug, so it remains to be seen whether patients and payers will be willing to pay for this complementary drug when AIT itself is still very effective,” he said. by email.

“AIT is most effective when given for 5 years, so it also remains to be seen whether the results and conclusions of this study would still be valid if performed during the typical treatment period of 5 years,” he added.

“Tezepelumab has been shown to work in asthma, and there’s no reason to think it wouldn’t work in allergic rhinitis,” he said in a phone interview.

“Patients with bad allergies who have not done well with SCIT may consider adding tzepelumab, but this comes at a significant cost. If medical treatment does not work, allergy shots are available at around 3 $000 a year. Adding tezepelumab costs about $40,000 more a year,” he explained. “Does the slight clinical benefit justify the greatly increased cost?” »